It's like trying to turn around on a one way street
I can't give you what you want
And it's killing me, and I, I'm starting to see
Maybe we're not meant to be 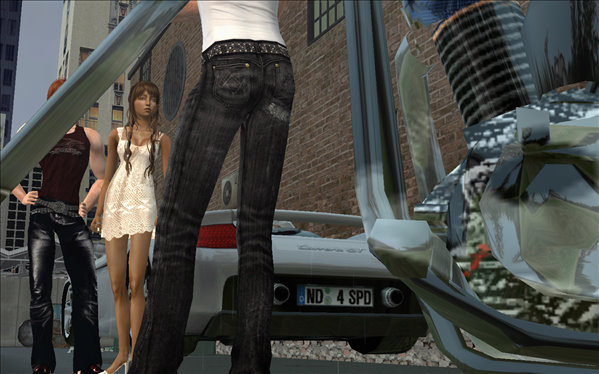 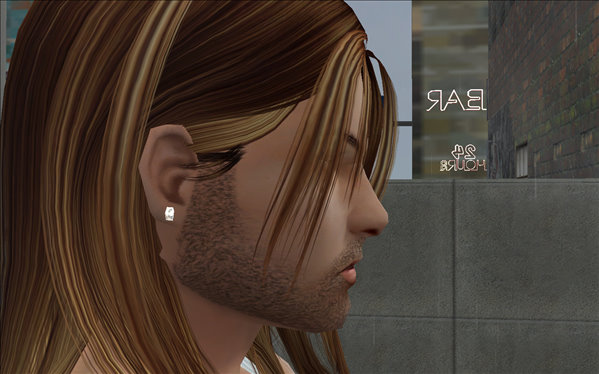 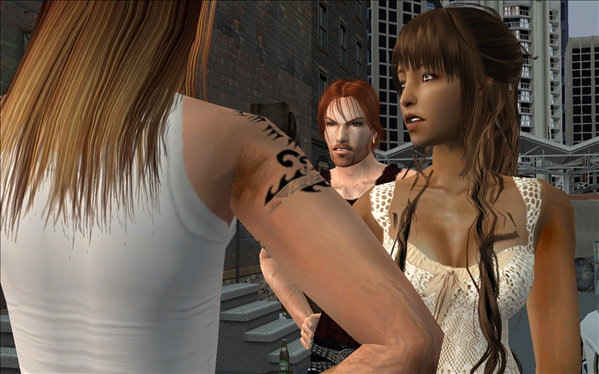 Beth stood between her car, parked next to a goddamned dumpster, and Ryan McDermott.   She saw him, and she looked white to the bone.  McDermott took two quick strides and planted himself next to her.   Son of a bitch... 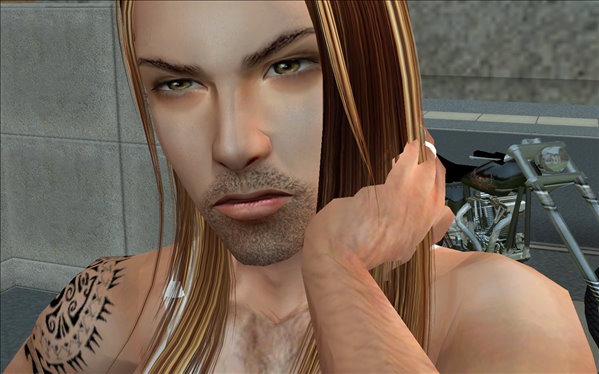 The place stunk. Exhaust from the freeway, garbage, somebody pissing against the wall. He hadn't been in a shit hole like this in years, many years, and did not believe she'd been hanging around and breathing the fumes because she enjoyed the smell. 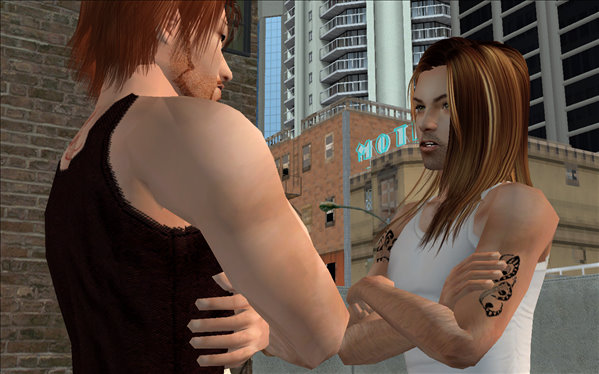 The heavy skies opened up, dumped rain, water filling the air, dull thunder.  Shoving in between them, Cooper glared at his wife and demanded, "What the hell is going on here?" 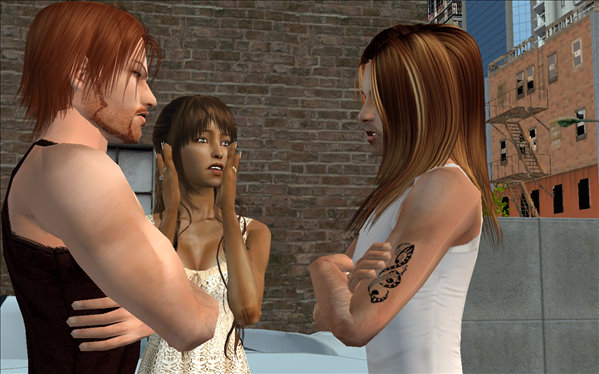 "Coop, nothing's going on."  He expected her to come back at him, fight, argue; she didn't.  She glanced uneasily between the two of them and put her hand on his arm.  He felt the tension in her hand, the rings, the canary diamond he'd given her, the wedding ring, she gripped his arm so hard he felt every ring, then she pulled back.  "I had an appointment and it didn't work out," she said, a tight voice.  "I'm leaving.  That's all I'm doing, I'm leaving."

"An appointment," he repeated. 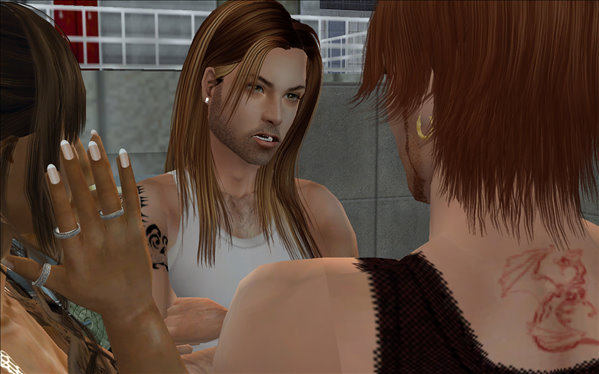 Cooper shifted his eyes from one to the other, anger roiling inside him, Beth watching him, wary, and McDermott, his expression murderous, waiting poised to strike. He didn't buy it; appointment my ass, in this part of town? They'd played him. Meeting in a cheap, filthy place like this to fuck - the thought of it made him sick as he bit out a response. "By the hour was it?  What's the problem, did I interrupt the meeting?" 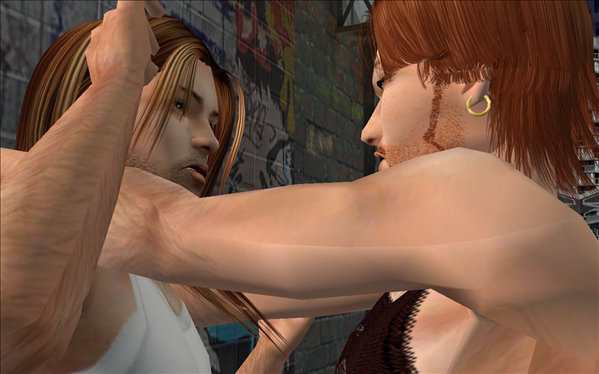 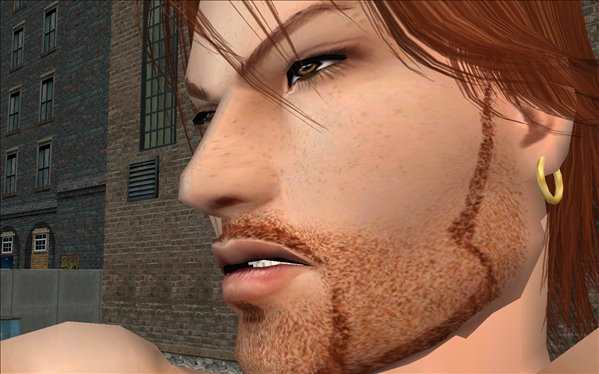 The blow came before he'd even finished the sentence, fast, hard. McDermott slammed him against the side of the wall, taking his breath, one long harsh growl, "You miserable prick, I should have kicked your ass a long time ago!" Ryan's hands gripped him brutally; he could feel them tightening like vices, vision fading as he struggled to breathe. 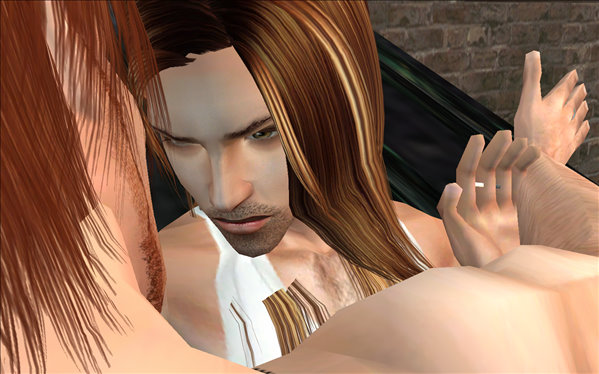 He tasted blood, heard Beth screaming "Get off him GET OFF HIM!" might have seen her, one quick glimpse, the glimpse gone hurled  against the dumpster,  heard her long terrified cry even though he couldn't see her or catch his breath. 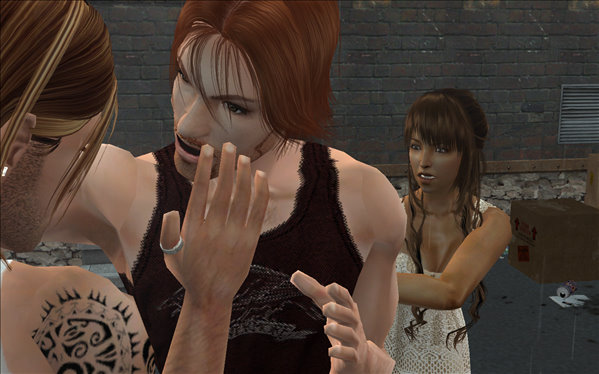 McDermott staring him down, the man's breath in his face, a deep grinding threat: "You want to sing me a song rock star?  Sing your last damned song.   I'm done with your shit." 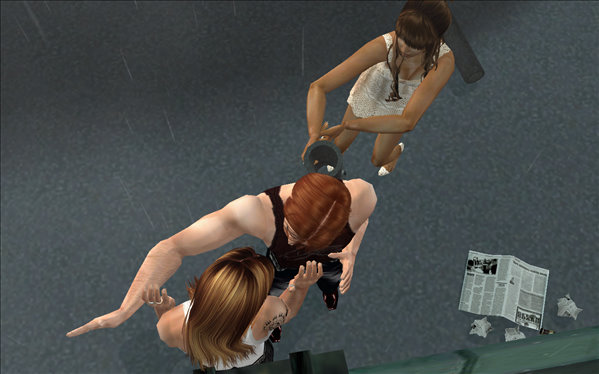 Fighting back, digging in an elbow, finding an edge, losing the edge, losing it, losing breath, Beth's voice echoing drifting through the rain.  Something hit, a long pipe swung at the man's back, rain pounding down, he saw it, blacking out,  Beth at the other end of that pipe a long silent solid thud.  The dumpster rocked under the force of that swing forcing all them back against the brick bouncing back again skidding on the wet pavement. 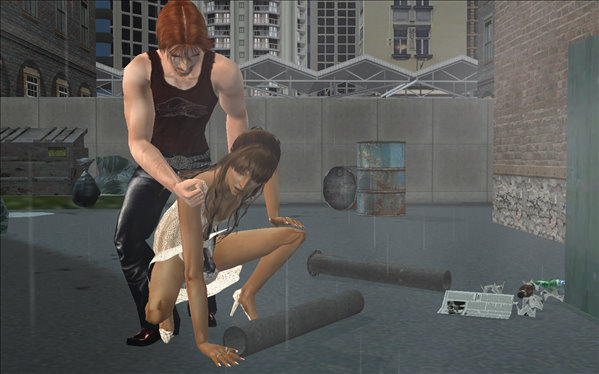 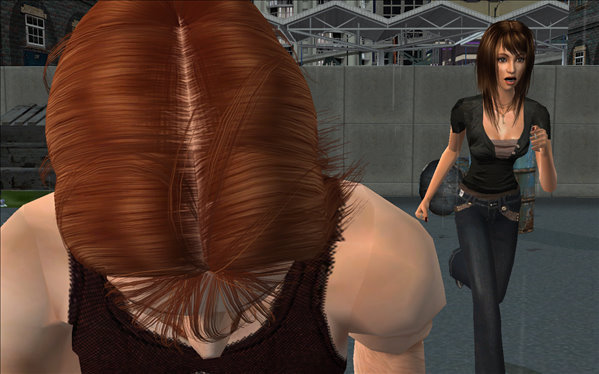 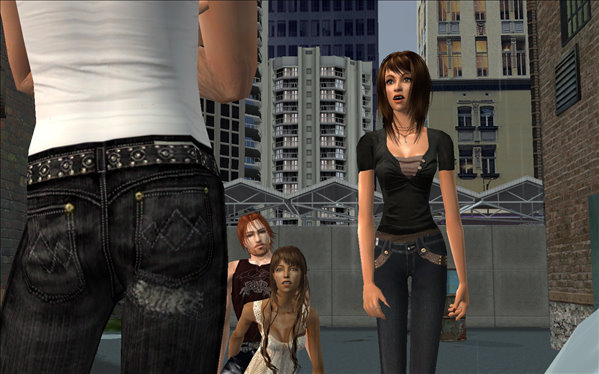 Ryan dropped him with a grunt of surprise.  Dropped him cold.  Staggering, Cooper saw McDermott turn his attention to Beth, she was down on her knees in the rain on the pavement next to the pipe.  She wasn't fighting, she was kneeling there in the rain, rain running down her hair and her face.  Another woman came running, running in the rain, he couldn't see her clearly, couldn't focus. 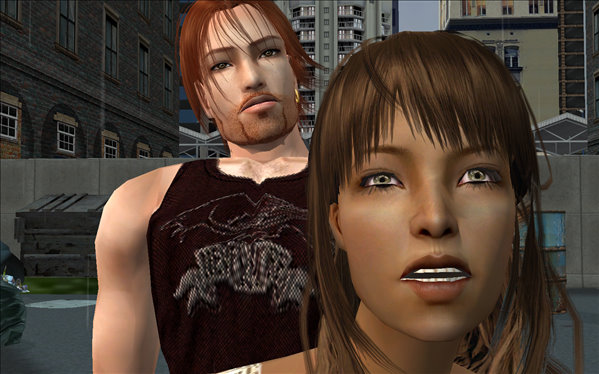 Enraged, in pain, wanting to go back at McDermott, knowing he couldn't take him, knowing she knew it, he locked his wife down with his gaze, Beth... and she was looking back at him now but she didn't get up.  She didn't move.   She should move, he wanted her to get up, to come to him.   She sat there in the oily rain blocking McDermott, hanging onto McDermott. 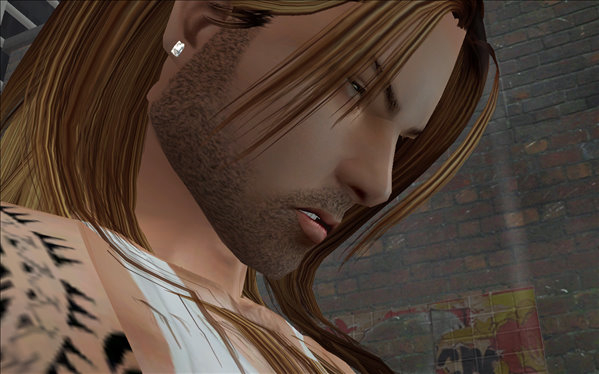 ...and as a revered Greek poet once said, "The shit has really hit the fan now, hasn't it?" :S

Interesting moment for Melinda to show up, and I have to wonder what Rayne's going to think when she hears about this. It should be very interesting to see what goes on in both Chameleon and Passages as a result of this...


great update! it was like a movie! "oh shit" seemed to slip after each section I read. lol

AAAAAHHHH!!! Just as I'm going to bed I find this. OMG!! I have a lump in my throat right now. I don't know what to say; I'm so shaken by this. Didn't expect this in but then again I knew, sometime, somewhere Cooper and Ryan were going to have the knock down drag out that they both wanted. And Beth caught right in the middle.

I'd say Cooper went over the edge but hey, she did sleep with Ryan so what else is he supposed to think? But then again, how could he say that to her. She hit Ryan with a damn pipe! If she wanted him she damn sure wouldn't have hit him with a pipe.

I'm stuck right now, this was so damn good that I'm just stuck. Oh that last part when he said he was through with her...I think I about peed my pants.

There isn't even a word to describe how great this is.

well the shit has started to hit the fan. There is more to come...

LOL Muzegoddess! Cooper has some justification for feeling suspicious and jealous, but yeah, he went too far. And he's not done yet. He was on his way somewhere when he ran into the two of them.

Thank you so much! The shots were just an awful problem.

Okay, I read it again. I read the previous entries. I'm still stunned.

OMG! I can see how all the points connect. All the events leading up to this one.

Cooper, wow. I can see how he really had no other way to react after everything that's happened.

What was Beth even doing down there?

Whoa! I have three words for you...That last shot! I think Coop's expression said it all, but his words added the chill factor. I think all the emotions in this chapter are summed up in that final shot. Is he really done with her? I wouldn't want to be in Beth's place right now.

Lunar, I'm glad it's coming together!

He had a choice; he could have waited and asked for an explanation later. Coop's not big on waiting though, and between Gemma, Rayne, Wyatt, and finally Ryan stomping all over his pride, there was no other way he could react. He couldn't turn and walk away after his wife basically rescued him from her ex-lover. He had one weapon left and he used it.

What was she doing there? She has a small design business, and she was there to meet someone about a renovation.

Val, maybe he is finished, but Coop is notoriously impulsive, and the ride isn't over yet!

Thank you so much!

*gasp* No! Beth, say something! I saw this coming, although I hoped I was wrong. It does make sense though seeing as how Cooper lets his emotions get the best of him at times. What's Miranda doing there?

And, I just noticed there's a new chapter out already as well. I must go check it out right away.

Beth's got nothing, no game at all this time.

Wanting to apologize for not also responding to comments. The shit really has hit the fan and Cooper jumped to conclusions. It is hard to blame him for that but he should have trusted Beth, given her the benefit of a doubt. If it had been anyone but Ryan it might have made a difference.

*psst, ASK, that's Melinda, not Miranda. Ryan was waiting for her when he ran into Beth.

He totally should have trusted Beth. That's one of the cornerstones of a successful marriage.

D'oh! I was thinking Melinda and wrote Miranda. That's what happens when your husband comes over and distracts you while you're writing a comment. ;)

You are absolutely right, he should have trusted her. Because he knows that Beth had loved Ryan, his pride and emotions worked against his better judgment. Not making excuses, just saying that his reaction makes a little sense. But yes, trust is a very big deal.

No worries! Too many names that start with the same letter will do that!

The whole interaction with this trio is painful to see... you can feel the emotions, the pain hanging in the air...suffocating them, killing them very very slowly...

I read all three episodes last night.. but I didn't know what to say... and I think I managed to say something coherent in chapter 28... but as I re read this chapter... I cannot think of anything to say..

Maybe.. they really aren't meant to be....
some times you just love someone "too much" and it is just plain painful and the best thing is to walk away...

Pride, jealousy, and a lifestyle that means constant exposure to a hell of a lot of temptation stacked up against love. On both sides. They are definitely struggling, and this race to the bottom is hurting both of them. Trusting each other means giving up control. Neither of them has been willing to do that.

Ryan is really the one caught in the middle.

I meant to continue reading Chapter 28 straight away, but decided that I *have* to comment on this chapter too, haha. Firstly, the choice of song was so fitting. (I actually listened to it twice. :P)

Beth and Cooper are like enemies in their past lives. They just keep torturing each other! :( I was very surprised that Beth would hit Ryan (I was actually going "yay" inside) but in the end, she shielded him. Sure, they didn't exactly do something, but I do think that cheating on him emotionally (and letting it show) is not excusable and I don't think that Beth deserves to be forgiven. >:( Please excuse my strong reactions, but I feel extremely unjust for Cooper.

(I don't know why but OpenID just suddenly stopped working, so I'm commenting with Name/URL.)

oh ning....she wasn't protecting OR shielding Ryan. She was trying to keep Ryan from going after Cooper. Ryan could kill Cooper in one red hot second. I am thrilled to pieces it came off like that though!! That's exactly how Cooper felt!

and hey, if we can get a strong reaction, we are DELIGHTED!!

And thanks to your ridiculously prolific updating lately I can find out what's in the next chapter right now!

Emotional scenes, and emotional shots. What a food processor mish mash of emotions. Cooper is petulant as always, but Beth gives him reason. Ryan is menacing in a sexy way, at least to me. Now, what self-destructive behavior will Cooper wallow in> Or will he? Great update ladies!!

Thanks Drew! I think we both would agree that Ryan is very sexy, menacing or not. As for what comes next for Coop, you just have to read on! LOL!

Thanks so much, we both appreciate your support.

Major changes have been made to the content of this blog. Some of the content may be eventually combined with something else but it is years old, was co-created with a team member no longer active, and yeah, VERY VERY OLD. If you're here, that's what's here.

You can expect strong language, nudity, alcohol and drug use, and adult situations.